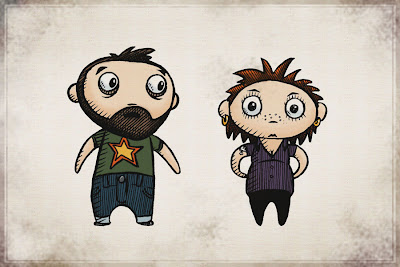 We started designing the characters surprisingly late during preproduction. The reason for that was that we didn't really know how we'd get them into the game. We knew we wanted to retain the hand made clay look throughout, but the techniques at our disposal each came with a different set of advantages/disadvantages.

Stop motion animation would certainly allow us to keep the look of the material, and the animation would keep all the nice little quirky imperfections that comes for free when you do stuff by hand. But having to manually lay bare over 200 individual frames (per character), just seemed too labor intensive.

Lighting the puppet would also be a bit of a chance taking, since the main character has to travel through a number of very different lighting conditions. If we found out that the lighting didn't work once the character was in the game, we would basically have to start over from scratch, reanimating and relighting.

3D-animation solved both those problems but we weren't certain that it would allow us to retain the right material look we wanted. 3D has a tendency to look too clean and generically lifeless. 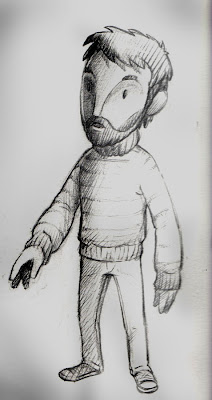 The two sketches above where both done by Mikael Lindbom from Dockhus Animation. They depict the games main characters Victor and Alicia Neff. Mikael did them early on, just to get the character design ball rolling. And though stellar drawings, the design was a bit too cute and cartoony. The themes in The Dream Machine have quite a dark slant to them, and cute characters with big heads would seem a bit out of place.

On a joking whim, he drew Victor to look like me (Anders). And though I have to admit, there are some similarities, I would never, ever wear a polo neck. 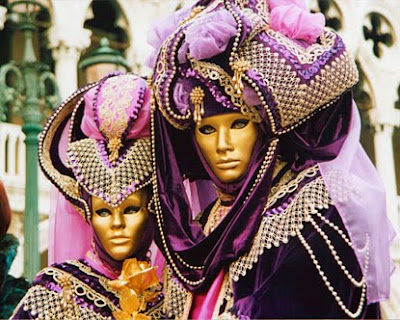 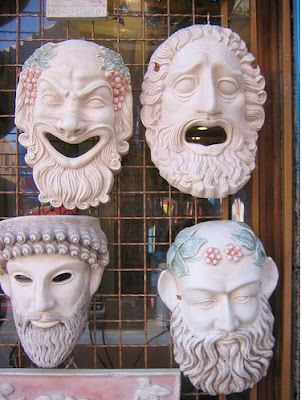 Wanting to steer away from the overly cute expression, we started toying with the idea that every character in the game wore a mask. We didn't have a rationale for it, except for the fact that both Erik and I are very fascinated by masks.

We were hoping that the players would just accept it as a rule of the game universe, that everyone wore masks. But that turned out not to be the case. 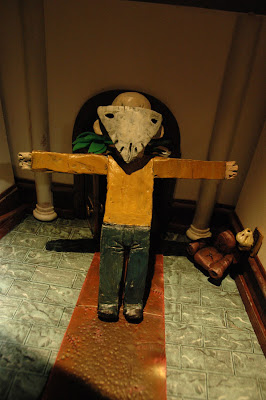 We wanted to go for an expressive, stylized look for the characters, reducing their features to bare bones geometric shapes. Erik (who did all designs for the characters) did the early test above, and though it has a lot of merits, it came off as too off-puttingly strange; its featureless face a bit too hard to relate to for this to be a suitable design for the lead character.

But we -- being of the opinion that it's better to err on the side of surreal and creepy rather than opting for something blandly cute -- felt that this was a step in the right direction. 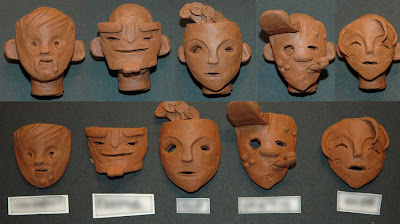 These early designs, for some of the other characters in the game, where a lot closer to our intent. But ultimately came off as stylistically a bit too diverse, running a strange gambit between reduced expressionism to the comically cartoony. 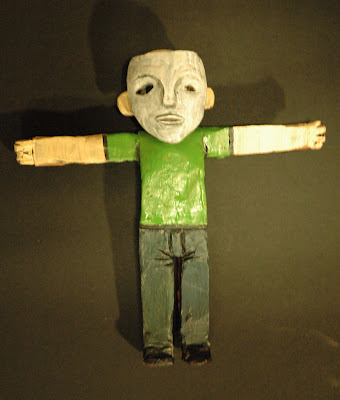 Another one of Erik's early tests for the main character. Those of you familiar with 3D animation can probably tell by the pose that by this stage we'd decided to go 3D.

In order to retain the look of the clay material, the character would still have to be built and painted by hand. From a series of turnaround photographs our 3D modeler would try to faithfully recreate the shape of the clay figure and apply a UV map lifted from the photos. 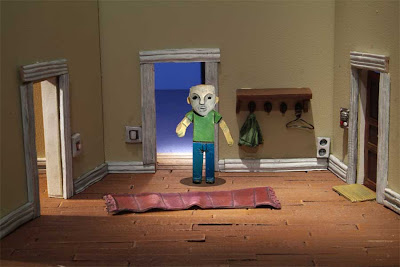 Everybody we showed this early test render to had a similar reaction: "It looks nice, but why is he wearing a mask?" The mask, instead of being suggestively creepy as intended, ended up being a distraction for the viewer. And we soon decided to tone it down. 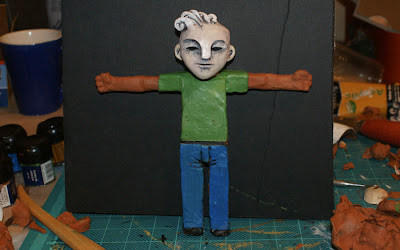 Honing in on a more final shape, Erik added more features to make the character a bit easier to relate to. The main character in the game, Victor Neff, is supposed to be in his early 30's, so the design just seemed a bit too young.

We also wanted to subtly hint Victor's belonging to the electronic music scene by giving him a nice synth hair-do. 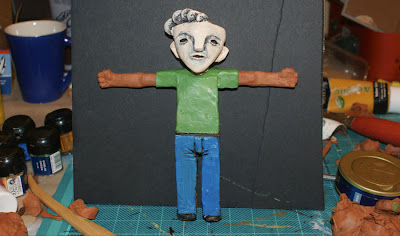 Adding a few years and reducing the overall shape of his face to the simple geometrical triangle, landed us very close to what actually turned out to be the final design for Victor.

Now the only problem that remained was: how do we paint him? 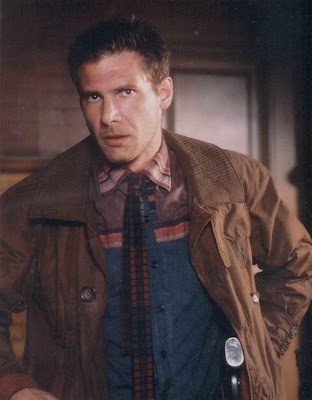 Both Erik and I are huge fans of the movie Blade Runner, and having just seen The Final Cut at our local cinema, it struck us that Harrison Ford wears just about the best looking shirt ever made in that movie.

Not so sure about the tie, though... 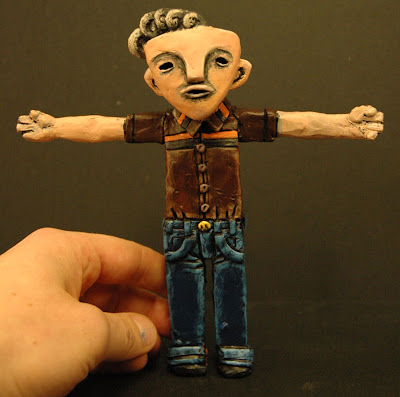 And voila! Some work on the detailing and a nice coat of paint later, we had us our leading man!